Winter greens
I've been living in the galilee for close on 30 years. Over this time, I have seen my neighbours from the villages close to my house walking with bags of something, which they've picked in the fields. I never quite knew what the "something" was, but was always fascinated to find out. Since opening my business, organizing workshops in the houses of those same neighbours that I have seen with the bags full of something, I now have a better idea what it is they're picking in the fields.
The first trick was to identify the different weeds that they'd picked. This in itself was a revelation. Suddenly, at best, things that I'd never given any thought to, proved to be edible. Or worse, things I used to spray with poisons in order to get rid of them, proved to be really tasty. "Roundup" out, wild endive, in.  Za'atar (hyssop) was easy. It grows everywhere, including my back yard, and even I know what it looks like. I have picked it and used it in salads for years. When one of my hosts first brought my guests olesh, I had no idea what it was. I had to look up a few on-line translators to realize that it was wild endive, or chicory. Wild silverbeet, spinach and fennel only vaguely resembled what I'd been buying in the supermarket all these years. And then there's the weeds that really don't have a common English name. Hubeza, translates into English as malva, and the protected  spikey weed called akub only has its scientific name, gundelia, for us English speakers to identify it with. I can't quite imagine little Johnny in Boston saying "oh no, Mom, not gundelia for dinner again"


You can't imagine the looks I got from my family last winter when I returned from one of my first workshops, strode into the back yard and started picking a green weed that was growing so thickly that you could barely see the grass through the weeds. When I rinsed the garden vermin in the sink, cut it up, cooked it and served it for dinner, my children started to doubt whether this new business was such a great idea. Now, they can't wait for the hubeza to grow in the garden. Who needs grass, anyway?
I guess I shouldn't be surprised that the wild equivalents of what I'd been used to buying in the supermarket tasted the same, but so different. That's to say, we can recognize the taste, but with about 3 times more flavor. Of course, a plant that is fed with fertilizers, sprayed with pesticides, grown in a hot-house and picked unripe so it will be "ok" 5 days later when it gets to the supermarket shelf, can't hope to taste as good as it's brother that gets the amount of sun that nature meant it to get, grows where nature planned it to grow and gets fed only what is in the ground in the vicinity of its roots. The supermarket variety might be prettier, but has nowhere near the intensity of flavor. It's not just me saying it. My guests always comment that greens or vegetables that they have previously bought in the supermarket, taste so much bolder when used in the workshop.
I am in no way advocating that we all eschew mass grown and marketed vegetables for the wild variety. This would be an ecological disaster. There are less radical and damaging alternatives. I know the local markets and green grocers in the Arab villages in the Galilee sell the local greens. They are commercially grown, but no GMP, no mass chemical fertilizers and lots of flavor. Even akub, which has been picked almost into extinction, is now grown in the hothouse of a kibbutz in the Upper Galilee.
I have no idea if you can readily find seasonal, edible vegetables and greens in various places around the western world.  For those that somehow do have access, in season, to local greens and vegetables, I strongly recommend asking the locals how they're prepared and giving them a try.

One Man's Sinye is Another Man's Kebab with Tehina

One of the wonderful things about cooking in the Galilee is that one common, family, everyday recipe can have so many variations. I have a number of hosts who show  guests how to prepare authentic Galilean cuisine and each one of them prepares the sinye in a slightly different way. To be honest, I've had to argue with my hosts, just to get them them to include sinye on the menu. To them, it's too common. To my guests, wonderfully exotic and embodies their image of authentic cooking in the Galilee.

Let's start with the meat. Usually it comprises of ground beef with a little lamb fat for flavour. One of my hosts turns up her nose, saying that it must be at least 50% lamb. Then yet another host makes it with a mix of chicken breast and dark leg meat. Which one is the real one? All of them!
And then there's the issue of shape. Should it be one large meatloaf, or smaller individual kebabs? There are those that fry the kebabs in olive oil, broil them on the barbeque or bake them in the oven.
To finish the portion off, we can add just tomatoes, just tehina, or a combination of the two. You can  finish the cooking off either in the oven or in the frying pan. As might be expected, a sprinkling of chopped parsley is optional. It doesn't matter which variation you choose, it's genuine, it's authentic and it's delicious!
When I saw my hosts adding cherry tomatoes to the kebab and tehina sinye, I was aghast. "this isn't authentic cooking. Cherry tomatoes were developed in Israel in the 1960's . That isn't traditional". My hosts smile at me in a patronizing way. "but that's how we cook. It looks nice and tastes good. My kids love it," they will reply. Of course, they're absolutely right. Authentic cooking isn't just about recipes handed down from generation to generation, it's about a living, changing way of eating that may have its roots in the past but adapts to the modern world. 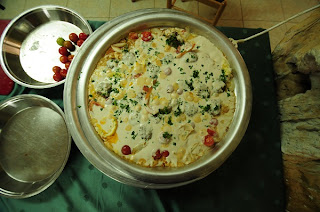 That's cooking in the Galilee!!

Ingredients
Kebabs – I kg/2 lbs minced meat – beef or chicken or a mix of it. The meat should not be minced too fine. The coarser the better.
25 gr./1 oz. lamb fat, minced.
1/2 an onion, minced or grated into the meat.
1 heaped teaspoon minced garlic.
1/2 bunch fresh parsley, chopped fine, or 1 spoon dried parsley.
Salt and freshly ground black pepper.
Tehina – 2 cups of tehina (whole-grain tehina is best)
Juice of 2 lemons
1 cup of cold water (important that it is cold)
(Garlic to taste)
1/2 teaspoon of salt.
**it is essential to make the tehina from scratch. Store bought, ready-to-eat tehina will separate in cooking and will not give the desired result.
******************
1 onion, sliced

Directions:
Mix all the kebab ingrediants together well. Let rest for 1/2 an hour at least.
Meanwhile, prepare the tehina. Add all the ingredients together, stirring with a whisk. The mixture might be lumpy at first. Not to worry. Keep stirring. If it is too thick, add a little more cold water. The consistency should be quite thin. It will thicken with cooking.
Correct taste. It should be quite lemony.
Set tehina aside.
Roll kebabs into 5 cm/2" balls. Sauté, in batches, in olive oil until browned on both sides but not cooked through. Set browned kebabs aside. Add the sliced onion to the hot oil used fro frying the kebabs. Fry the onion quickly for 2-3 minutes until it just starts to change color.
Lay kebabs on to a clean frying pan (or oven tray) cover with fried onion. Pour tehina over the kebabs and jostle the pan a little so the tehina seeps between the kebabs and spreads evenly. Place the frying pan over medium heat or oven tray in oven, pre-heated to 180˚C.
Cook for 5 minutes, until the tehina thickens and changes colour from white to light brown.


**it is possible to add sliced tomatoes or cherry tomatoes when pouring the tehina over the kebabs. Cherry tomatoes give added flavor and colour.

Posted by galileat at 07:20 No comments: